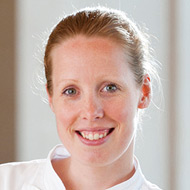 “I like light, not too sweet, interesting flavors, something that boosts you even at the end of a long dinner.”
Recipes

With the series Funky Brownies, Van Beurden demosntrates her capacity of exploring new paths which take classic pastry to a more youthful, colorful and casual level without renouncing even a milligram of gourmand pleasure or intensity of flavors.

International Chefs in Pastry by Ann’s Training Program in Bangkok

Marike Van Beurden, Hans Ovando, Javier Guillén, and Emmanuele Forcone are some of the pastry chefs who will share techniques, knowledge, and experiences throughout 2017.

She knew she wanted to dedicate her life to patisserie when she was a little over 10 years old, although she did not know exactly why. After her academic education she began a dizzying career that seems to have no limits.