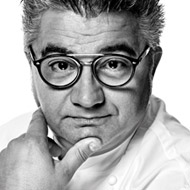 He is a global -or franco-global- chef, founder of L’École du Grand Chocolat Valrhona. Great figure in world pastry.
Recipes

The Salon received 7% more visitors than in 2016 and more than 500 participants from 60 countries.

Frédéric Bau: “Where is the talent? We are increasingly in a world of sheep”

This great pioneer makes an invitation to imagine the future, to think differently, to preserve the emotion.

18th volume of our magazine is surprising, transgressive, elegant, avant-garde. But above all, it is ...

Enric Rovira: “If you do what people ask you to do, that’s not creating, that’s serving”

Enric Rovira and Frédéric Bau talked about the process of creativity in dessert making, seeking out their common ground regarding those aspects that work best in chocolate-making or pastry cooking. Their analysis reviewed both what has happened in the recent past as well as the current challenges that professionals need to overcome.