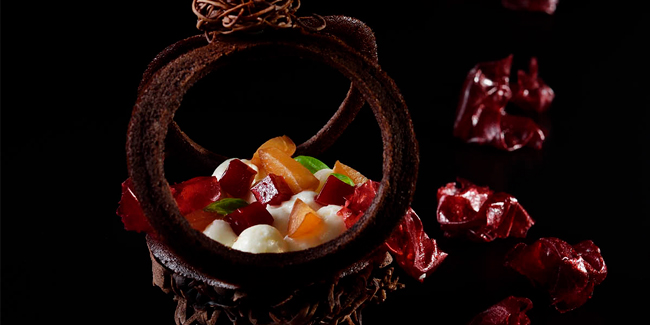 What drove Masahiko Ozumi, one of the protagonists of so good # 25, to go to France in 2014 was not a passion for pastry-making, but soccer. After graduating from university, he went to Paris and learned French while teaching soccer for local boys. That’s what he thought he should do for a living until he discovered what pastries mean to him there. Pastry was always familiar to him since his father was the owner and pastry chef of Kent House in Osaka, Japan. There are hundreds of pastry shops in Paris, but it was Arnaud Lacroix who pushed him into the real world of pastry. He started his career as a pastry chef in the A. Lacroix, which was chosen as the best tearoom in Paris by an American magazine. The curious trainee, at the age of 23, acquired knowledge and techniques rapidly, and he became a sous chef after only a year.

After being an apprentice to Mr. Lacroix, he was going to work hard to step up as a sous chef in the starred hotel in Paris, but the COVID-19 pandemic came in the way and he had to go back home to Osaka in September. He is now 28 and still young. There are many things he dreams of doing. Currently he is the executive chef of Kent House, which his father founded, and just started his own Masahiko Ozumi Brand, which wants to be a bridge between the French and Japanese pastry cultures.

His creations are generated from reflection, a flash of intuition, and even coincidence. The idea of ​​a reconstructed Forêt Noire, a recipe that we share only on our website, struck him when he found he could make kadaif at home with a frying pan. Using chocolate kadaif as a bottom, he built a triangle structure with round windows of thin chocolate cookie and combined with whipped cream and cherries.

Combine everything well and put it in a piping bag. Heat a frying pan and pipe the batter all over. Cook thoroughly. Shape it into a disc while still warm and place in a 7cm-wide ring. Let dry. Make 2cm-wide ones for decoration.

Combine the butter and egg whites. Add sifted dry ingredients and put in a piping bag. Pipe the batter around the back of three semi-sphere molds and bake at 180℃ for 6-7 minutes. Fold the warm tuile into a triangle. 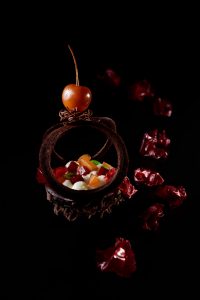 Heat the fresh cream and add the hydrated gelatin. Pour over the white chocolate and mix well. Keep in a fridge for a night.

Bring the puree to a boil and add sugar and pectin previously combined. Pour into a square mold and let cool until it sets. Cut into 5mm cubes.

Bring the puree and water to a boil and add sugar and pectin previously combined. Keep in a fridge for a night. Bake at 80℃ for two hours. Cut into pieces and pinch it into preferred shapes while still warm.

Place the Tuile triangle on a Pâte à Kadaïf and place Confit Framboise in the center and pipe the Ganache Montee. Decorate with cut cherries, Papier Framboise and basil. Place the mini Kadaïf on top.

Discover these creations by Masahiko Ozumi in sogood #25 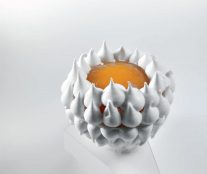 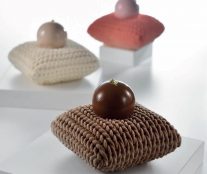 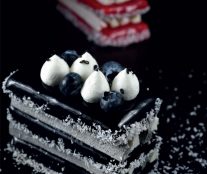 Get more recipes at So Good #25 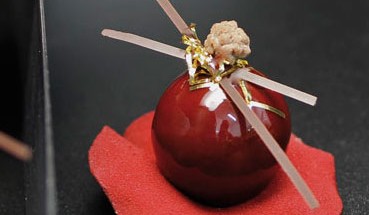 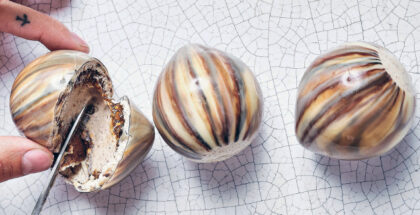