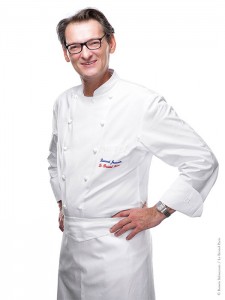 How to address the sweet creations in a grand palace steeped in history and gastronomic luxury? It is the great challenge that Laurent Jeannin faced everyday, pastry chef of the iconic Parisian hotel Le Bristol in general and in particular at the three-starred restaurant Epicure. The challenge is even greater when the savory offer is in the hands of a chef the likes of MOF Eric Frechon. To succeed, Laurent Jeannin had a commitment to desserts loaded with elegance and clean flavors, while continuing in the same line as chef Frechon when lightening and intelligently and moderately updating French savoir faire.

In any case, Laurent Jeannin’s career has been marked by challenges. He took his first steps in the world of pastry at the age of 15, training in the traditional pastry shop Valade (Cusset). In 1986 and for three years he joined the team of pastry chefs at Fauchon, taking orders from Pierre Hermé and Christophe Felder. From pastry workshops he takes a leap into the world of hotels, becoming part of the pastry station at the Hotel Crillon and then heading all the sweet station at the hotel George V. Always aware of new challenges, Jeannin decided to travel to Japan in 2001 and work there as a consultant until 2007. His return to France comes linked to another challenge: leading the pastry of all the hotel Le Bristol and joining efforts to turn Epicure in a worldwide gastronomy reference. The restaurant gained its third Michelin star just two years later, and Laurent Jeannin has begun collecting awards for his work.

Mix the stabilizer and sugar. Combine the milk and cream and bring to a boil. Mix the egg yolks with the honey and add the sugar and stabilizer mixture. Add the thyme and continue to cook. Pass through a chinois. Leave to mature in the refrigerator and churn. Reserve the ice cream in the freezer.

Hydrate the gelatin sheet in iced water, drain and melt together with 200 g of honey ice cream.

In the bowl of a stand mixer, mix all the ingredients in the stated order. Roll out the dough between two acetate sheets to a thickness of 2 mm and reserve in the refrigerator for 30 minutes. Pre-heat the oven to 170ºC. Remove both acetate sheets and replace with two parchment paper ones. Bake for 20 minutes. 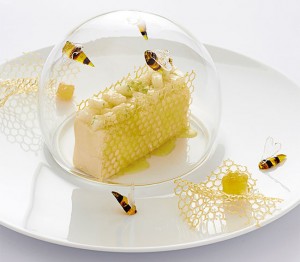 Combine the honey and the zest and juice of two lemons, slightly adding some yellow color. Reserve in the refrigerator until use.

Cook all the ingredients to 165ºC and pour over a silicone mat. Allow to cool and store in an airtight container with calcium chloride. Place in a blender and process until a honey caramel powder is obtained. With the help of a sieve, sprinkle over the silicone molds. Remove the excess. Bake at 200ºC for 5 minutes and unmold. With the help of a hot knife, cut into rectangles of the desired shape. Reserve in an airtight container.

Peel two Doyenné du Comice pears. Cut into 5-mm dice and mix with the fresh ginger previously grated with a microplane. Add the juice of half a lemon. Reserve in the refrigerator until use.

Mold two ice cream rectangles and, with the help of a melon baller, make a hollow in the middle of each rectangle. Fill the hollow of one rectangle with sablé and the other one with honey espuma. Put one rectangle on top of the other, add the honeycomb and garnish the surface with pieces of pear with ginger and lemon. Add some grated lime and finish by garnishing with two pieces of honeycomb and some bees made with sugar. Sauce with the honey-lemon mix.

You will also find these two creations at so good #16 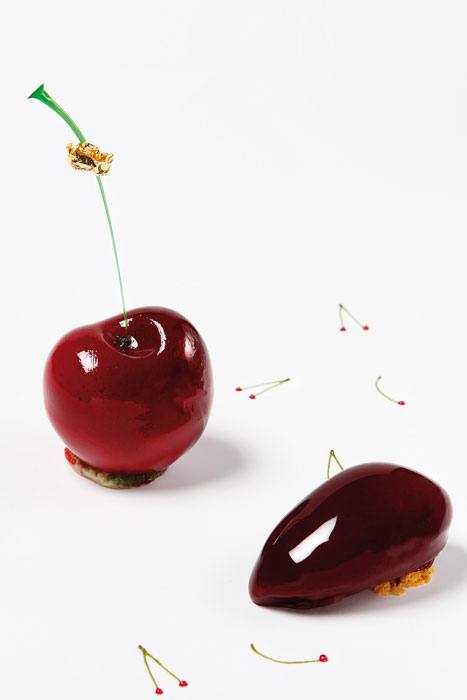 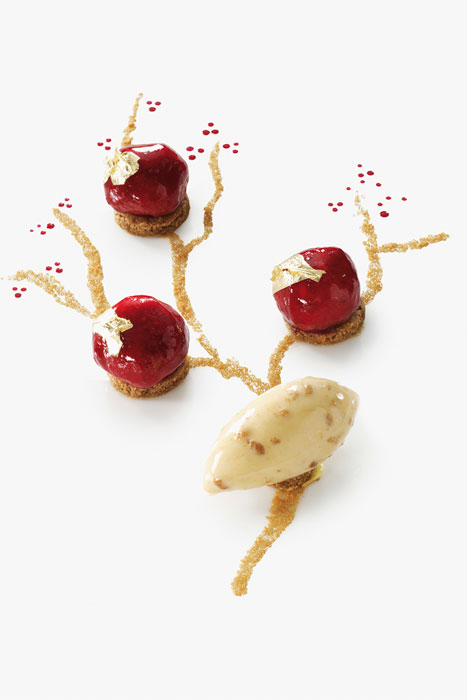 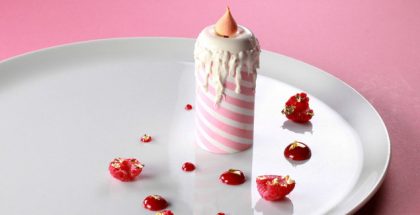 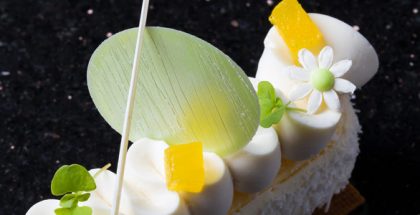 Giorgos Avgeros: ‘The Greek pastry world is on a upward trajectory of progress and evolution. I believe that the future is very bright!’ A new website to better respond to the needs of the professional pastry chef 60 creations by Antonio Bachour Sirha Lyon 2023 sees figures from the pre-pandemic era