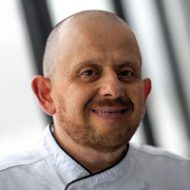 The Mexican chef Luis Amado saved up some money at age 17 and bought a cart to sell churros through the streets of his native Guadalajara, at which time he greatly enjoyed the interaction with customers.

His admiration for chefs and cooks since he was a child led him to move to the United States to study culinary arts while working in a kitchen in a nightclub. The ascent to pastry assistant ended up awakening the passion for this trade. A passion that he did not take long in sharing with other professionals.

At only 26, he was hired to start, in what would later be the Culinary Institute of Michigan, a professional bakery and pastry program that over the years has become one of the best in the country. In 2016, Lake Michigan College trusted him to develop an ambitious chocolate training project. Currently, the facilities are being built and the inauguration is expected for September 2021. Meanwhile, Amado offers consulting and private classes internationally.

“I must admit, I play it safe on flavors, I don’t like to deviate too much from the basics, but when it comes to building or presenting bonbons, I simply follow no rules and let my imagination go wild.”

Luis Amado chocolate bonbons: Safe flavors, ‘go wild’ shapes Chocolate bonbons mosaics by Luis Amado. The sky is the limit Recipes and reflections We like it – So Good 22 is here