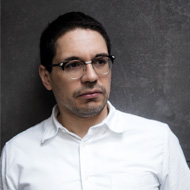 Juan Contreras was born in Baja California (Mexico), but grew up on the border between Mexico and the United States, studying during the day in San Diego and at night in Tijuana. He started cooking for his friends and roommates in college and he liked the experience so much that he enrolled at The Arts Institute in Santa Monica, where he obtained his culinary degree.

After working in many restaurants preparing meats and fish salads under a lot of pressure, he was attracted by the peaceful atmosphere and respect for products in the pastry section. And it is at the Atelier Crenn (Three Michelin stars) where he has been able to completely dedicate himself to pastry for the first time. Here he works alongside Dominique Crenn, one of the great female figures of world cuisine, to create fun and elegant desserts in which he uses some traditional Mexican ingredients that portray not only the Mayan culture, but also his heritage.

“Savory! It’s very different from pastry, in which you can take your time, attention to detail, and you can control your tempo ”