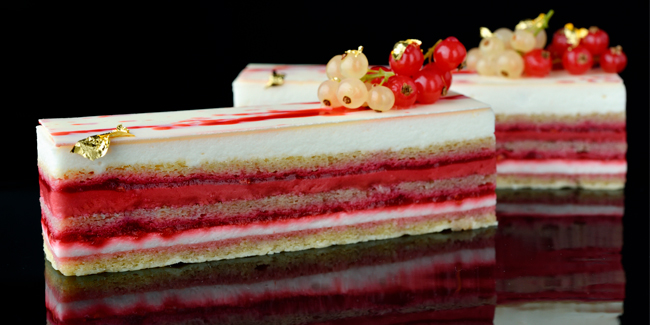 It was the first time I had visited Hideki Kawamura at his pastry shop, À tes souhaits!, after eight years. “I have experienced some changes since the last photo session for so good.. in 2011,” he said. In 2007, he had bought out the shop from the then-owner who had employed a young chef just come back from apprentice days in France. The shop was fully revamped into a white, bright and stylish space designed by a globally renowned architect in 2014. In 2015, he finally became a member of Relais Desserts before he won the crown of victory at PASTRY LIVE, the Showpiece Championship, along with Jiro Tanaka who used to be his apprentice in 2016. The long-sought chocolate and ice cream shop was opened next to the pastry shop in 2017.

He was seeking out the way to create new cakes with his own unique statement at the time he became an owner of the pastry shop. The breakthrough came when the architect told him about the concept for the revamped shop; back to origin, be timeless. He allowed him to rediscover the traditional and regional recipes which he had encountered when he worked in Grand Hotel des Thermes Marins in Brittany, France. “I remembered cakes I had in France didn’t look fabulous but tasted very good. Then, I realized if the taste is very good and everyone loves it, although not looking great, the cake will go down in history and will be time-tested standard. Traditional cakes like chiboust, éclair or Paris-Brest look plain, but each of them has its own unique taste and texture, you know. When I was younger, my focus tended to be on making cakes more beautiful, but I became to think that it is the taste I pay more attention and the texture I try to emphasize on as time passes. If you have various kinds of cakes with different tastes and textures in the showcase, people won’t get bored of them, and we, pastry chefs won’t get bored of making them.”

As you grow older, your sense changes, and your sensibility evolves. Kawamura used to make much sweeter cakes according to the tradition of French cakes, and he didn’t allow himself to use anything extra that would mask the flavors of ingredients. Now he uses liqueur which he thought to be “extra” for intensifying the ingredients’ own flavors. And he opted to use less sugar as health consciousness has grown in the world and in himself.

I realized if the taste is very good and everyone loves it, although not looking great, the cake will go down in history and will be time-tested standard

Approaching his late 40’s, Kawamura seems to work more freely and openly. He visits other countries for a few times a year to be exposed to different cultures and to look around things he likes, such as architecture. What he absorbs outside Japan is reflected in what he creates. In this way, timeless and unique cakes that only he can create are born.

Here we exclusively share on our website the recipe of this Opera aux framboises, one of his classique revisité. This summer version of Opera is just like the traditional one as the sponge is imbibed with syrup and a thin and crispy sheet of chocolate sits on the top. However, chocolate and coffee are replaced by lime and raspberry. The velvety texture of raspberry crémeux and jelly is just like butter cream and ganache of the traditional opera. A faint touch of anise flavor adds a new dimension to the taste of raspberry. “It was not easy to decide right amount of the anise flavor because if you add too much, it would mask the flavor of raspberry. I wanted just enough of it to make the taste of the cake vivid,” he explains.

Combine whole eggs with almond powder and 400g of sugar and beat until they get fluffy. Make stiff meringue with egg whites and 75g of sugar. Add flour to the egg mixture. Add the meringue and the butter one the other. Spread the mixture over the baking sheet and bake at 180℃ in an oven for 8 minutes.

Combine the pectin with one third of the sugar well. Heat raspberry puree, frozen raspberry, glucose and the rest of the sugar to the 40℃ and add the pectin mixture. Bring it to the boil. Remove from the heat and let cool. 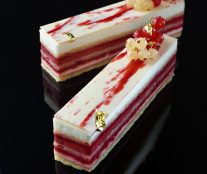 Combine pectin with sugar. Mix the mixture with raspberry puree and egg yolk and bring to the boil. Remove from the heat and add the butter. Add eau de vie framboise when the temperature of the mixture drops to 40℃ and mix well with the blender.

Combine lime puree with 86g of the sugar and heat. Remove from the heat and add hydrated gelatin, and dissolve. Boil the sugar and isomalt and add the whipped egg whites to make Italian meringue. Combine the meringue with whipped cream, the lime puree mixture and lime zest.

Splash the food color with a brush over the 40cm×60㎝ sheet and spread the white chocolate thinly. Cut it into 12㎝×2.5㎝ pieces.

Discover also this recipe by Hideki Kawamura in sogood#22 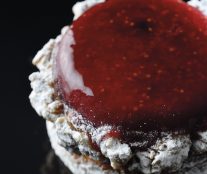 Get more recipes at So Good #22 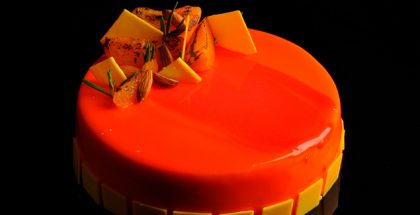 The Great Wave off Kanagawa with Asian flavors and effervescent kombucha foam by... June 8, 2022 | Marc Oliva 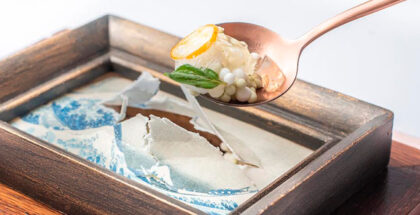