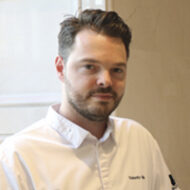 At just 18 years old, the Alsatian chef Valentin Mille was an apprentice in the kitchens of the three-starred L’Auberge de L’Ill, which opened the doors for him to work for six years with chef Guy Savoy and became responsible for the pastry proposals of its restaurants all over the world.

After a stint in Australia, he was hired to run the pastry team at a luxury hotel in Hong Kong. Since 2022 he has been the executive pastry chef of the Four Seasons Madrid. His objective here is to find the right balance between local, traditional, and modern, with proposals that are “crowd pleasers”, that is, attractive to very different clients.

“The idea is to create a pâtisserie that makes sense in the place where we are, that is not only beautiful, but also tasty and healthy. That the customer is able to taste it even when he is full or sated”