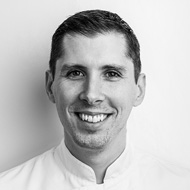 Russ Thayer is young, but has already acquired a solid career as a chef, teacher, and researcher. He explains that he is dedicated to pastry thanks to his grandmother. When he was little, he wanted to drink coffee and she gave him hot chocolate telling him it was coffee. Since then he has declared himself in love with chocolate.

Under the banner of Chocolate Academy, he is dedicated to finding the best way to exploit the flavors of chocolate naturally.

Striking a balance between looks and taste is paramount. It must be both. What has helped me the most in my career is tasting the work of other chefs

Mini pastry is trending. Ten creative and profitable XS snacks Ten creations with berries to surprise your partner on Valentine’s Day Manual gestures and pastry with a bite reign on our 23rd journey Russ Thayer. Searching for the boundaries of chocolate