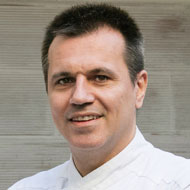 Alongside Mateu Casañas and Eduard Xatruch, Oriol Castro makes up the trio of great chefs at the head of the restaurants Disfrutar in Barcelona and Compartir in Cadaqués. The three share vision and culinary concerns thanks to their time in elBulli, where they forged a friendship that has led them to join efforts. Born in 1974, Oriol Castro studied at the Joviat School and attended Barcelona’s Guild Pastry College. This pastry training was essential in his creative process. After joining elBulli in 1997, he became the right-hand man of Ferran and Albert Adrià, creating with them the innovative techniques that revolutionized the culinary world. A creative restlessness that is still very much alive today in Disfrutar.

There are things that come to you when looking for it, and other times by mistake, but being aware and focused on what you are doing leads to something interesting.