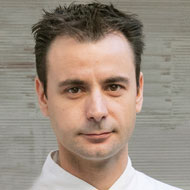 Alongside Oriol Castro and Mateu Casañas, Eduard Xatruch is part of the trio of chefs who head the restaurant Disfrutar in Barcelona and Compartir in Cadaqués. Born in 1981, in a family that worked the field and was a fruit and vegetable wholesaler, he soon became attracted to cuisine, an activity that attracted him because it means manually working with things that are living. At the age of 17, after studying at the School of Hospitality in Cambrils, he went to elBulli for three months of practice and once there, he stayed. Xatruch has also gained experience in restaurants such as Heston Blumenthal’s The Fat Duck, Massimiliano Alajmo’s Le Calandre, or Arzak, with Juan Mari and Elena.

Some people define our cuisine as very technical. But everything in cuisine is technical. We use many techniques, yes; we create new techniques, too. But there is more technique in rice than in the false gazpacho sandwich that we have prepared in Disfrutar.