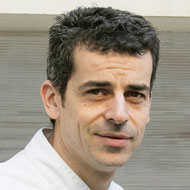 Alongside Oriol Castro and Eduard Xatruch, Mateu Casañas makes up the trio of great chefs heading the restaurants Disfrutar in Barcelona and Compartir in Cadaqués. Born in 1977, his first contact with cuisine comes when his parents open the restaurant Si us plau in Roses. In addition to forging himself as a chef at elBulli and being an important part of the creative process of the restaurant, Mateu gained experience in other restaurants such as Xavier Sagristà’s Mas Pau or in the Four Seasons Hotel in London.

We like to mark the flavors. In our menu, there are 3 or 4 dishes that are intentionally riskier at the flavor level, but 90% are very defined, recognizable flavors. If you are offering a new, curious, texture it is better to bet on a taste of general liking.