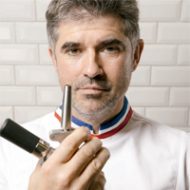 He is one of the most respected and refined ice cream masters in the world. More than 25 years of experience, World Pastry Champion in Lyon 1999 with France, and Meilleur Ouvrier de France Glacier 2000, are milestones of the life of a great professional. His work philosophy in formulation is well explained in his book, Apprenez l’Art de la Glace et des Sorbets (2002), available only in French. The book details ice cream making from the traditional French perspective, with the ideal formulation to boost the ice creams’ flavors and textures to the max. Ice creams and sorbets, ice cream aperitifs, ice cream petit fours, nougats, plated desserts, savory ice creams, ice cream cups, among other creations, are found within the pages of this great book.

His last adventure is the opening of the ice cream shop, Une Glace à Paris, in 2015, with which he returns to ice cream, his true passion. In collaboration with the pastry chef Olivier Ménard, this ice cream shop recreates great classics of pastry and ice cream through an ornamental aesthetic, inspired by the past and with a very personal vision of the flavor influenced by travel. In his creations, Ryon proposes attractive sets of textures, which take the customer to a new level in the tasting of ice cream, with creations that reinterpret the past with the mastery of one of the most refined and versatile professionals.

Beyond ice cream making, his versatility in other disciplines such as pastry and plated desserts is also well-known, a virtue that has deepened in his time in Café Pouchkine and in the creative development of the desserts of the restaurants of the prestigious chef, Anne-Sophie Pic.

I make things I would make for myself. It may be seemingly selfish, yet it is a search for my pleasure and the pleasure of others

Five inspiring masterpieces with WholeFruit chocolate Relais Desserts incorporates Emmanuel Ryon and Eric Ortuño among its new members All on 26 Five different ways of approaching the chocolate coulant while maintaining its essence So many (Pastry) stories to tell, and now we have reached issue 25! Icep Hotel School Romania announces exclusive masterclasses in 2020 The ‘street cake’ popsicle comes to Une Glace à Paris with a bang Bonnefoi, Damon, and Hermé, among the winners of the Prix d’Excellence 2018 Which Relais Desserts will be rewarded with the Prix d’Excellence? Ryon creates his own profile in the Paris Christmas campaign