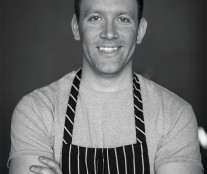 The executive pastry chef at the helm of The Langham Hotel in Chicago, Scott Green, has gone through several phases in his professional and personal life before crossing paths once again with so good.. magazine to share some of his latest creations. If in the previous issue we found him about to participate in the Coupe du Monde de la Pâtisserie (Lyon), from which he took a creditable third place alongside Josh Johnson and John Kraus, this time we dare say his situation is almost the opposite. If last year there were trips, meetings and team trainings happening, at the moment, working in the kitchen dominates, overseeing the production of each new menu or banquet with his pastry brigade. And of course he is very happy with this change. His body asked for a reduction of the workload by taking on a pastry chef’s line of work. But just because the workload is reduced does not mean that life is less stimulating, on the contrary. 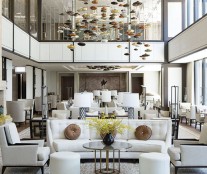 Pavilion. The Langham Hotel in Chicago

Heading the pastry station at a resort such as The Langham, with a first-class restaurant, Travelle, Afternoon Tea service, ice cream kiosk (Parlour at The Pavillion) and intense banquet activity, the great challenge is to ‘solve problems’, as Scott himself likes to define his work. Achieving lovely results that are also well-balanced in the combination of flavors, textures and intensities, but above all feasibly integrated in specific menus or services. That is his daily challenge, ‘solving problems’ is what makes him happiest. And for that he combines the two dimensions that are fundamental to his professional philosophy: art and science.

Scott Green remembers his time at the French Pastry School, alongside the great Jacquy Pfeiffer and Sébastien Cannone. Then, while strengthening his bases and foundations closely linked to the French pastry tradition, he began to work as a teacher giving a new dimension to his knowledge, to some extent forced by his students. Not only did he know and explain how to make each creation, each technique, but he also had to learn the reason why, satisfy students’ curiosity and, thus, further expand the scope of his abilities.
His time as professor solving the ‘whys’ also came to an end. For Scott, theory was just as important as practicing, and preparing products which end up in the mouth of a customer who will enjoy it. This is how he ended up in his current destination in Chicago. There he had the opportunity to join two of his main dimensions, science and art.

Savoir Faire and an American point of view

Science, knowledge, theory and technique are fully connected to his time at the French Pastry School. But if his knowledge is French, his gaze is fixed on American tradition and culture. The great classics of American patisserie, the public’s favorite combinations in their environment, are the subject of his work in a revision through a theory that lightens and sharpens each result.
And then there’s the art, to which Scott Green refers to his past as an artist. A concern for expressing forms and objects with which to seduce the outsider has been present in his life. Currently, patisserie is the perfect discipline for him to continue captivating where once this was done with sculpture or paintings. Either on a plated dessert, a cake or an artistic sugar figure, it is always important to draw the guest’s visual attention, as a beginning and warning of a tasting experience which is to be seen.

As a result, science, the knowledge of technique, is a fundamental aspect. But his aesthetic concerns are only part of the work to be performed. Obviously working with flavors is another great aspect to consider. The combination of easily recognizable, intense yet balanced flavors, playing with acidity, crunchiness or sponginess, which tend to be present in varying intensities.
But there is still another critical factor to attend to in his daily work to ‘solve problems’, and that is to fit every creation in the place where it is intended, either in the Afternoon tea proposals, a themed banquet or at the end of a more or less loaded menu. All without losing sight of the common production system and the need to integrate into it.

These are the challenges that Scott Green likes confronting. And although adding some limits and problems are an obstacle to creativity, this chef is of the opinion that absolute freedom is not always the best fertilizer for a good result. Therefore he moves in this kind of challenges, this is why he likes to focus on combinations and proposals that have long worked and offer new versions and adaptations. A good example of this is these creations he shares with us now. Some, such as Noir, come from the Afternoon Tea service and originally was an éclair with a delicious blackberry jam as its filling. Or the case of Sonya is another challenge, turning a creation that worked very well with pistachio, lime and cherries to that of a shop window cake.

Combine IQF fruit and sugar A and heat. Combine sugar B and agar and rain into mixture. Bring mixture to a boil. Add lemon juice. Robot briefly to obtain desired texture.

Bloom gelatin in cold water. Combine whole milk, glucose and purple coloring and bring to a boil. Pour mixture over chocolate and pate a glacer. Add gelatin and hand blend. Use glaze at 30-35ºC.

You will find two other very special creations in so good.. magazine #14. 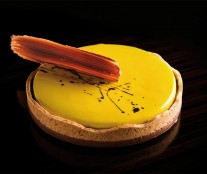 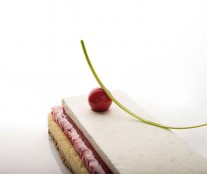 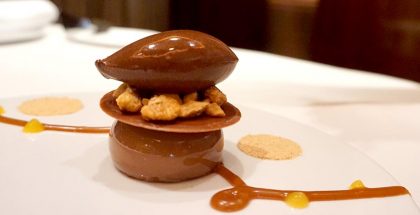 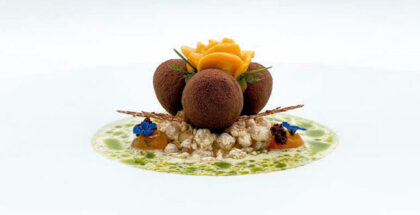