She is a lively, active pastry chef who loves her job and is always moving. This is something that is perceived as soon as you meet Kirsten Tibballs, owner of her own Savour Chocolate & Patisserie School, near Melbourne. But this is also something that her creations transmit as well. We do not talk about the rigor in the process of elaboration, perfection in finishing, and the utmost respect she shows for her trade every day, although we could. We now refer to something more intangible, and it is her incredible capacity to generate and spread ‘good vibes’ through her work. Whether it is the decorations, the use of colors, or the reinterpretation that makes the classics even more sacred, Kirsten Tibballs is able to transmit positivity with her pastry. Perhaps that is why she is the So Good.. magazine collaborator who most frequently visits our pages.

On this occasion, the Australian chef exclusively gives us a modernized version of the classic Saint Honoré, mounted on an elongated Breton shortbread base with cream spheres placed on the profiteroles de choux; a powerful and aromatic mint, pineapple, and coconut cake, decorated with majestic chocolate lilies; and a delicious Apple Cinnamon Tart, crowned with three tantalizing apples of an intense green color. 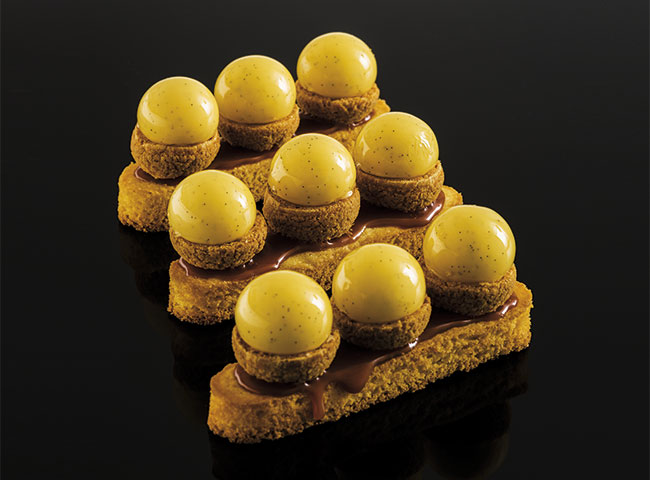 Beat the softened butter with the sugar and salt. Add the egg yolks followed by the sifted flour and baking powder. Wrap the dough in cling film and refrigerate for at least 2 hours. Roll the dough to 10 mm thick and cut with an éclair cutter. Place each rectangle inside an éclair cutter and bake at 180°C for approximately 10 minutes.

Bring the cream to a boil and keep it hot. Warm a large saucepan and melt the sugar one third at a time; allow each addition to completely dissolve and caramelize before adding the next amount of sugar. Continue until all the sugar is completely dissolved and a golden brown colour, then add the warmed glucose. Add the hot cream carefully on a low heat. Once all the cream is added, remove from the heat. Still stirring, add the butter and salt. Cover the caramel with cling film, pressing it down onto the surface to avoid a skin forming.

Place milk, water, sugar, salt and butter in a saucepan and bring to a boil. Remove from the heat and stir in the sifted flours until combined. Return to low-medium heat and cook for approximately 2 minutes, stirring continuously, until a smooth mass has formed. Transfer to the bowl of an electric mixer with the paddle attachment. Beat the mixture for about 1 minute then slowly incorporate the eggs in small amounts, stopping the mixer regularly to scrape down the sides. Place the mixture into a piping bag and pipe 30 mm round profiteroles onto a lined tray. Place in the oven at 130°C for 15 minutes. Increase heat to 150°C for 15 minutes. Increase heat to 170°C for 15 minutes or until a golden colour is achieved.

Boil the cream and vanilla beans previously cut into two and scraped. Combine the sugar and yolks in a bowl. Pour the boiled cream over the yolks mixture. Place back on the stove on a low heat to 82°C while stirring and then strain. Sieve the anglaise then add the pre-soaked gelatine. Pipe into a small sphere mould and freeze.

Bring the neutral glaze and water to a boil. Fold in the mirror glaze. Use the glaze at 30°C.

Pipe caramel into the base of the Breton shortbread. Cut the bases off the profiteroles and turn them upside down. Place the frozen vanilla cream on a glazing rack and glaze with the clear glaze. While still frozen place inside the overturned profiterole. Place three vanilla profiteroles on top of the caramel in a line. 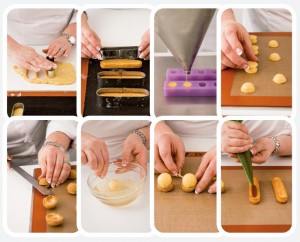 You will find two others recipes in so good #15 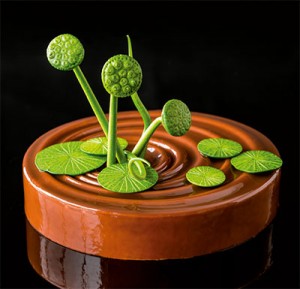 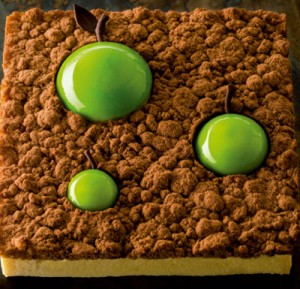 Cuore minicake from the book “Play” 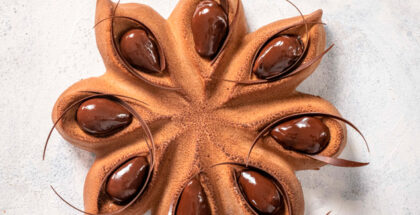 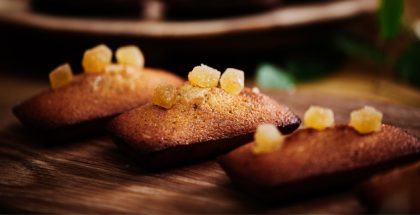