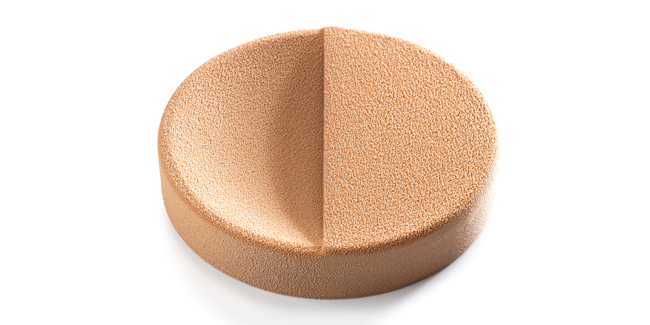 In this collection of turrones (Spanish chocolate bars), Adrià Rodón once again demonstrates some of his many talents, such as absolute neatness, perfection, and meaningful creativity.

When coming up with this collection, the junior chef of the Chocolate Academy in Barcelona set the goal of creating a different mold that would stand out from the traditional bar nougat or turrón. To do this, he had the idea of ​​making a round mold with a curve at the top that sinks inward. At first, he explains, “I was inspired by the traditional Galician octopus dish, which has this small hole on the inside, but I wanted to get a mold where I could perfectly mark this curve since it is the main protagonist in the design of these nougats ”. To achieve this, he made plates in the shape of a hemisphere that measure just half of the mold. “Once I have the mold filled and closed, I attach this plate with tempered chocolate in such a way that it seems that it is part of the same mold. Thus, I am able to mark this shape a lot more and play with the shadow caused by this plate ”, he assures. 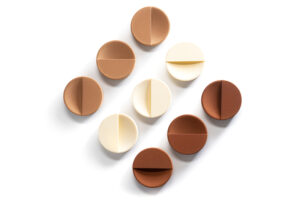 For the creation of the mold, he designed a matrix, first with chocolate with the help of silicone molds. Later he passed it to plaster and used a thermoforming machine.

The collection consists of three pieces, each with a type of chocolate (dark, white, and milk) painted with a velvet effect and with unusual textures that work very well together. Below we share the recipe for the milk chocolate nougat “which is made up of a maple syrup gel, reduced to 84º Brix and accompanied by a very tasty praline of peanuts and honey”, he adds.

For ten nougats, 11 cm in diameter

Chop the peanuts into small pieces. In a saucepan, mix with the powdered sugar and stir until you get a perfect caramelized finish. Once caramelized, add the butter and spread on a silpat. Reserve in an airtight container.

Caramelize the sucrose using dry method and add the honey. Cook until all the water in it evaporates. Add the warm peanuts and roll out on a silpat. Let cool and grind in a blender together with the peanut oil until the desired texture is achieved. 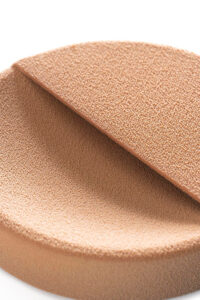 Mix the peanut praline, cocoa butter and Jade milk chocolate and pre-crystallize at 24ºC. Add the caramelized peanuts in pieces and pour into the mold.

Cook the maple syrup with the glucose over medium heat until 85º BRIX. Reserve in a container covered with cling film touching the surface of the gel until use.

Melt the couverture and the cocoa butter and mix. Reserve in a stove at 40ºC until the moment of use. 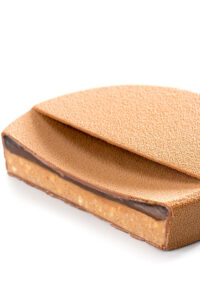 Pre-crystallize the chocolate at 29ºC. Spread between two 2-millimeter slats. Cut hemispheres the size of the mold used. 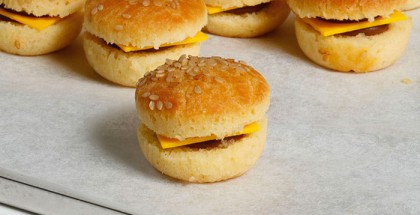 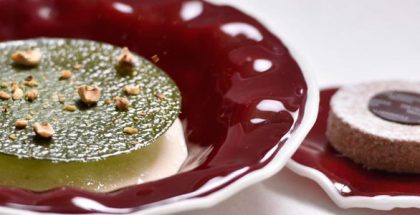 A new website to better respond to the needs of the professional pastry chef 60 creations by Antonio Bachour Chong Ko Wai: ‘The more difficult the craft, the more satisfying it is for me’