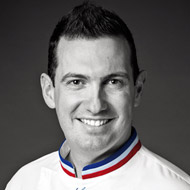 Yann Brys learned the trade of chefs such as Michel Mendiela, Philippe Urraca and Sébastien Gaudard.

Having been the emblem of the pastry shop Dalloyau for several years, the MOF begins a new professional stage in 2018 marked by the opening of his own pastry shop at the Hotel Brach in Paris. A project in which all the details have been planned, from the configuration of the workshop to the design of the products.

Currently, in addition to his own boutique, he continues to work as a pastry consultant and is focused on the projects of the Evok Hôtels Collection Group as Executive Pastry Chef, creating the desserts menu for Hôtel Nolinski in Paris.

The tasting must be a real pleasure, it must excite. I create my own molds so that my products have more identity and are more modern