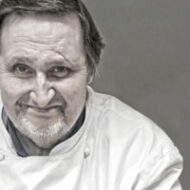 Philippe Conticini is one of those pastry chefs who have achieved nearly everything.

From his mythical desserts in verrine (which allowed him to control in which order the components of a dessert should be tasted) to the way he revisits the most important classics of French pastry, turned into the icons of La Pâtisserie des Rêves, the business he run until 2017 in Paris and Japan alongside Thierry Theisser. From 2018 he opens his own business with two shops in Paris and a corner-shop in Galeries Lafayette.

Eight galettes des Rois that break the mold Twelve Christmas bûches to travel without leaving home Philippe Conticini: ‘Now my creativity is less noticeable – it is appreciated when you eat my products.’ SG#28. What is surprising is that we continue being surprised Twelve bûches for a Christmas in nature and with winter flavors Babka Praliné, the joint creation of Conticini and Cagnes Eight chocolate eggs for a creative and special Easter Philippe Conticini revisits the traditional Mont-Blanc for Valentine’s Day Twelve Christmas bûches for a poetic and magical Christmas Taste of Paris gathers great local pastry figures