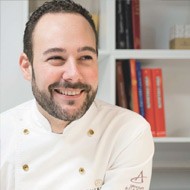 His taste for gastronomy comes from his family, thanks to the restaurant business ran by his parents in Centelles (Barcelona). He studied hospitality in the Escola Joviat in Manresa and in his fifth year discovered the world of sweet and especially chocolate. In 2001 he joined the team at the Chocolate Academy and two years later began teaching courses at national and international levels. Victory arrived in the 2004 CANJOP (National Championship for Young Pastry Chefs) and the 2005 MMACE (Spain’s Best Master Artisan Chocolatier) Lluís Santapau Trophy, the highest honor in Spanish chocolate making. Since 2015 he is director of the Chocolate Academy Barcelona and chef for the Callebaut brand. Josep Maria Ribé represents creativity from knowledge, demand, professional rigor, and well-done work.

I am not nor do I pretend to be the best pastry chef in the world. I am satisfied if someone makes a cake of mine