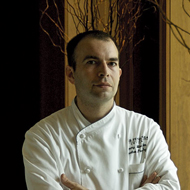 He has built a successful career in desserts stations at high-end restaurants. He runs the JM Purepastry consultancy.

Leading the JM Purepastry, Jimmy McMillan’s aim is to transmit throughout America how important it is to live pastry passionately – the very same passion he has developed since the age of 15, after working in several restaurants. He defends, with fascination, that pastry is a meeting point between science and arts, and that those starting in the trade need to fall in love with it.

American Chefs are not afraid of what is new or different, and our market place is constantly craving this. This is our greatest strength and our greatest weakness