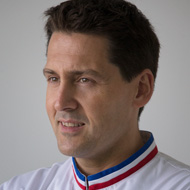 MOF Glacier 2004 and Pastry World Champion in Phoenix 2006 with the French team, David Wesmaël is a consolidated figure in the French ice cream scene, with a long career dedicated to pastry training and ice cream advice. This shooting for counselling for the food industry and the small craftsman has given him a very thoughtful vision about the needs of the market and the final customer. This experience has been transferred to his firm La Glacerie Paris, where Wesmaël offers artisan ice cream from a variety of formats that play with colors and ice cream flavors.

In his ice cream, he seeks the intensity of the flavor through simple recipes with traditional ingredients. Over the years he has made an effort to be more demanding in the selection of the best suppliers of fresh ingredients. The objective is to obtain the most optimal results in the final product. This is the starting point for creations that usually appear in original formats, which show how much remains to be done in creativity beyond ice cream in bulk.

He expresses one of the key principles of the French ice cream craft very well, to recreate at the first bite all the flavor of the raw material used