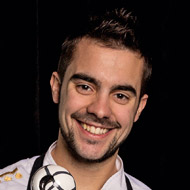 At only 16 years old, David Gil was working under the orders of Nandu Jubany, in the restaurant Can Jubany. It was the beginning of a meritorious career that would lead him to great restaurants like Le Calandre, Bras-Laguiole, and Mugaritz. In 2012, he enters Tickets and his life changes once in contact with Albert Adrià, which exerts a great influence on his way of understanding what is sweet. From then on, he becomes one of his closest collaborators and accompanies him in the openings of his restaurants in Barcelona. Since then the creative pastry chef of the elBarri group (www.elbarriadria.com) daily faces a job that has nothing to do with the monotony of a routine. It is a constant challenge to talk to the pastry chefs at each of Adrià’s six restaurants, Tickets, Niño Viejo, Hoja Santa, Bodega 1900, Pakta, and Enigma, to understand their needs and make creative proposals. A level of self-demand, fast work, and unbridled creativity that has far exceeded expectations.

In his creations for elBarri, ice cream occupies a central place, with very varied techniques in function of the proposed objective. Ice creams with nuts without stabilizer, colorful sorbets and intense flavors, well-balanced ice creams, iced drinks, frozen air, the use of liquid nitrogen, Japanese scraped ice cream or kakigori, among other techniques made below freezing point, are common in his desserts.

In competitions, David Gil has also had successes. In 2015, he won the Lluís Santapau Trophy for Best Chocolatier and from 2017 he began to intensify his teaching work, giving courses and demonstrations. 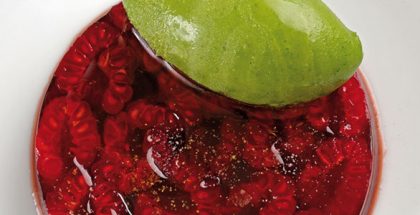