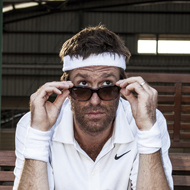 Founder of the dessert restaurant Room4Dessert in New York. He lives in Bali, where he is in charge of the pastry program at KU DE TA, Seminyak.

He spends his time between New York, his hometown and where he founded the dessert restaurant Room4Dessert, and his current operations center in Bali (Indonesia). He has enriched his career by creating and promoting a firm of innovative ingredients (Willpowder), as well as developing several collaborations in culinary projects, all of them related to the world of desserts and gastronomy.

The story is the magic of pastry, and what gets me excited to make new things