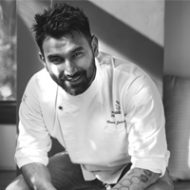 Proud ambassador of modern patisserie in India, the young chef Vinesh Johny has not only reached an enviable technical and creative level, but has been concerned with sharing his knowledge with his fellow citizens in India. To do this, he opened Lavonne Academy, which over the years has become one of the benchmark centers in pastry training in Bangalore and its entire area of ​​influence, with an influx of 1,200 students annually. In addition to developing his own style in modern pastry, comparable to that of other great chefs of international prestige, Vinesh Johny investigates his own roots and culture to develop lines of his own products and even interact with the great gastronomic legacy of his country.

“From students, home cooks to even doctors and engineers, people are aware that it’s never too late to follow your passion and dreams”

Vinesh Johny: “In India the popularity of high-quality pastries is on the rise”