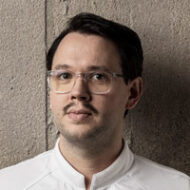 Romain Dufour discovered his love for bread thanks to his uncle, who had a bakery in a small town near Bourges (France), where at the age of only 12 he worked as an apprentice for two years. However, it was at the Plaza Athenée in Paris, under the direction of Christophe Michalak, that he acquired discipline, creativity, and attention to detail. His desire to see the world led him to travel to Dubai and become head baker for Intercontinental Hotel Dubai at the age of 21. In 2016, he moved to Chicago as Master Baker of Research & Development of Eurogerm USA, a French / American company specializing in dough conditioners, bread mixes, and pastry mixes. A position that he combines with the training and consulting work he provides from his own website.