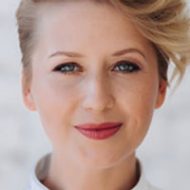 Her colourful style stands out, a French-inspired style and fruitful production within the emerging Russian pastry scene. Active on social networks, Nina Tarasova’s passion for the trade is her main asset as an international consultant. With notebook in hand, she is always drawing new sketches for creations and jotting down ideas in the most unsuspecting places and times of the day. For her, this is the best way to dealing with the obsession she feels for a profession she cannot stop thinking about. It is precisely this enthusiastic nature, her constant collaborations with other professionals, and her classes in pastry schools worldwide which are true catalysts for the new generation of Russian pastry chefs, a profession mostly dominated by women in that country.
She works with a wide range of registers, but they are always based on a very French point of reference. A new recipe without a detailed blueprint of its interior is inconceivable; for her, this is of utmost importance.

For me France is not only a country that brought a food into the cult and art, not just a place of quality products and famous Pastry Chefs… but it’s the country of my soul

Recipes and reflections Icep Hotel School Romania announces exclusive masterclasses in 2020 Icep Hotel School Romania will gather great pastry stars in 2019 Penkina, Bachour, Tarasova and Guichon will visit Romania in 2018 Twelve top pastry chefs will visit Hangar 78 during the first half of 2018 Jordi Bordas sets off the Bangkok World Pastry The most popular posts on the So Good.. website in 2016 Nina Tarasova’s extensive pastry tour in 2017 Major international chefs in Jean-Marie Auboine’s courses program Nina Tarasova: ‘Thanks to color, we imagine what taste will be in a future’