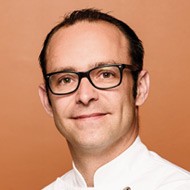 Nicolas Dutertre learned and perfected his abilities with the MOFs in L’École Nationale Supérieure de la Pâtisserie Françcaise. He also worked as sous-chef pâtissier in the five-starred Hotel Plaza Athénée in Paris, alongside the great Christophe Michalak, before becoming the pastry chef of Punto G. in Montreal. Nowadays, Nicolas Dutertre faces a new challenge as a Cacao Barry chef in the Chocolate Academy TM in Montreal (Canada)