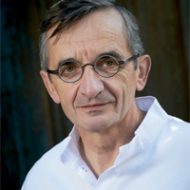 At a young age, Michel Bras would help his mother in the kitchen. And years later, and in a completely self-taught way, he created his own refined and daring culinary style that has made him a universal chef.

In 1981, he invented the coulant with the desire to emulate the thrill of enjoying a hot chocolate after a cold family day out in the snow. And in no time, to his surprise, it became one of the most reviewed and copied desserts in history around the world.

Since 2009 it is his son Sébastien who is in charge of the family restaurant, Le Suquet in Languiole (France), showing the same sensitivity and passion as his father.

“(About coulant) No one will ever be able to take away from me the emotion that invaded me after the first successful cooking tests.”