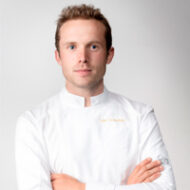 At just 17, Lluc Crusellas worked at the desserts station of the restaurant of the well-known Spanish chef Nandu Jubany during summer. That is where the career of this young professional began, a professional who after training in prestigious Barcelona schools such as EspaiSucre and Hofmann joined La Pastisseria by Josep Maria Rodríguez, winner of La Coupe du Monde de la Pâtisserie and where he learned production methods, organization and teamwork. Since 2017 he has been the head pastry chef at El Carme Pastisseria, a small bakery in the city of Vic (Barcelona).

Crusellas is a good example of a generation of well-prepared pastry chefs, with proven experience despite their youth and proud to belong to a special, different trade.