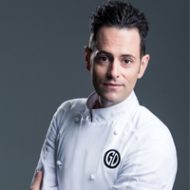 He takes his first steps in the trade at Lafay Cake Shop in Lyon, the city where he also obtained his professional diploma. He moves to Paris to become part of Guy Martin’s team at the three Michelin star Le Grand Vefour. His international adventure began at the Grand Lisboa in Macau as Sugar Decorator, and a year later he joined the luxury catering company, Potel et Chabot, as decorator. Since the summer of 2014, he has been working as a consultant for numerous brands in Russia and abroad for his own company, GD Sweet Concept.

Gregory Doyen is currently Creative Chef at the Moscow restaurant, Coffeemania, where he is in charge of the famous desserts which have become the hallmark of the establishment.

My creations, first of all, are based on aesthetics, because a cake must have a surprise effect and should be enjoyed with the eyes in the first place. The taste has to be clear and precise to give a unique experience for the customer