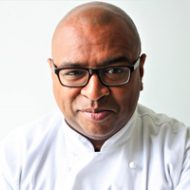 It is not easy to summarize 28 years of professional career, and less when the person in question has traveled the world and has embarked on countless restauration, hospitality, and retail projects. We are talking about Graham Hornigold, also recognized with several awards in the United Kingdom, where he has spent most of his career. In his previous stage before embarking on solo adventures, he became the pastry chef for the Hakkasan group, with up to 47 restaurants across the globe. It is precisely this vast experience that has helped him to set up, alongside Heather Kaniuk, a pastry consulting service called Smart Patisserie, in which he can display not only his pastry creativity, but also his knowledge in team management and organization of the production. His love for fresh and light pastry is also one of the hallmarks of Longboys, the signature doughnut project with which he manages to refine this popular product while still being accessible.

DECLA “we (Longboys) want to produce top-end pastry that is accessible to all, both in terms of flavours and price points”

Twelve examples of haute patisserie for all audiences Graham Hornigold & Heather Kaniuk: ‘The world deserves better taste across confection, but it shouldn’t cost the earth to get it’ Graham Hornigold: ‘Our job is to refresh the palette and complete the meal’