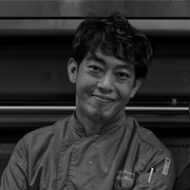 Born in the Gifu prefecture, he worked for several years at the Grand Hyatt Tokyo before moving to France, where he spent a stint at Laurent Duchêne’s patisserie in Paris. When he returned to Japan, he opened En Vedette in 2016 and is currently considered one of Japan’s great chefs.

He employs  a technique of combining unexpected ingredients to underline the faint aroma of the main ingredient. It is like using compelmentary colors in the design to stand out by arranging them side by side