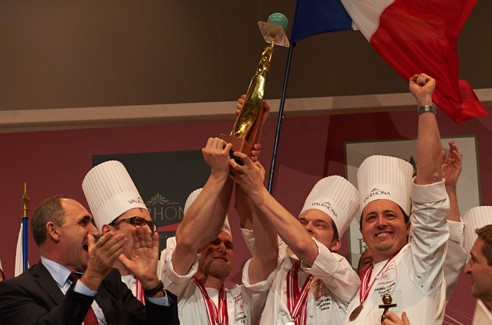 Quentin Bailly, Mathieu Blandin and Joffrey Lafontaine obtained the gold medal for France at the last edition of the World Pastry Cup, held on 27th and 28th January in Lyon, at Sirha’s Paul Bocuse Hall. The great favorite team proved again why they are one of the strongest and most competitive countries in this competition. Alongside the French, the Italian and Japanese teams also mounted the podium.

France almost reached total excellence with an impeccable work full of good taste and sensibility, complete regarding tastings, spectacular and original in the buffet, without giving way to unusual flavors. The French made an astounding F1 car whose front and bodywork were made in chocolate, meanwhile the rear and engine were made totally in sugar. The accuracy of some details and the daring distancing from usual canons in artistic sugar (flowers, swans and so on) lent the final result a higher merit.

Japan, for their part, with a team made up of the chefs Tetsuro Akasaki, Daisuke Tomita and Koh Moriyama, also stuck up for the integration of the buffet work. Like the French team, they assembled the sugar and chocolate showpieces in a combined presentation. Their work, based on music, also stood out due to its perfection and virtuosity, although some were expecting a certain degree of innovation like the one they showed with their composition at the Japanese qualification competition. Other aspects which probably kept the Japanese team from reaching the gold medal were some mistakes when serving the frozen cake and the chocolate cake, a bit too cold according to some sources. 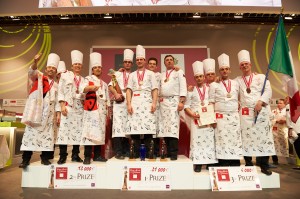 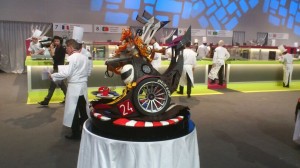 In conclusion, the work of both teams was far above the rest, regarding technical virtuosity and other remarkable aspects. Italy was the ‘good student’ that, without standing out in any facet in particular, offered a regular work, praiseworthy with regard to the fineness of the tastings, with which once again they found a position on the podium – the third position this time. Maybe some innovation and daring were to be expected, also in the field of flavors and products used by most teams, although this should be no surprise as it is usually like this in this kind of competitions.

As in past editions, nerves and difficulty played tricks on some teams, like the ones from Belgium or Singapore, whose showpieces unfortunately fell at the very last moment. For the first time, Spain did not take part in this competition, although that fact did not take away the intrigue from the event, which was followed by a large amount of people both live at the Hall stands and online. 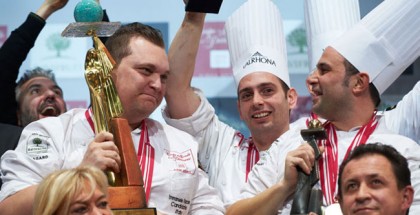 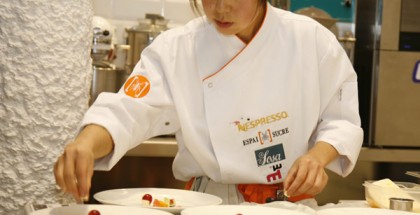