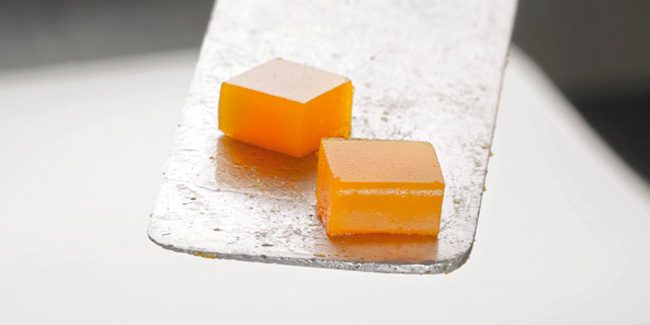 “Más”, by Mario Masiá, displays an interesting battery of techniques to adapt fruit pieces to the temperature of ice cream. In this article, we summarize some of the most relevant in a journey that starts from candied fruit to continue through the different methods of gelling and, with the advice of Martin Lippo, we also explore the possibilities of the ultrafast freezing with liquid nitrogen . In most cases these techniques and ingredients are familiar in pastry, but their recipes have been studied and adapted to the conditions imposed by subzero cold so that they maintain their characteristics and commercial life in perfect conditions. Masiá works with parameters such as the ideal degree of concentration of solids (Brix) and the PAC (Antifreeze Power) to extract as much as possible from these fruit inclusions in the ice cream dessert. The intention is to lay out the advantages and disadvantages of the multiple ways in which fruit pieces can be worked with today to incorporate flavor, color, and texture into ice cream compared to traditional methods or with creations which are not designed to stand out at temperatures below zero.

Let’s see the more interesting techniques and fruit toppings from the book, “Más”

Candied fruit dice, known as tutti frutti, has been made from the Pilgrim pumpkin variety for many years . It is used because it is very hard and supports a process of candying that lasts for more than a week. In addition, its interior, which is light white, is ideal for pigment without interfering with another color.

Candied fruit in syrup, known since time immemorial as “almaiba”, is a method of conservation of the Arab peoples who used sugar instead of honey to dehydrate fruit. Today, this “impregnation” or conservation process varies greatly depending on the size and type of fruit to be candied until it reaches the ideal degree of sugar concentration within the fresh product, located at 74º Brix. A condition in the application of this type of technique is that the fruit has some consistency to remain firm or solid after water-steeping and intense cooking. The result is colorful fruit thanks to the pigmentation processes; a topping that brings a lot of sweetness to the creation, but little flavor to the original fruit and a firm and compact texture.

These candied pumpkin dices have multiple applications in Christmas pastry, such as the roscón de Reyes, the panettone, the Sicilian cassata, and turrones, among many other specialties.

In the creation process, the pumpkin pieces are covered with water for three days, changing the water each day. Boil for an hour with the water and let it soak for two more days, changing the water every 24 hours. In addition, dye is added to the tpt syrup. For three more days the pumpkin is boiled for one hour each day and 10% of the syrup is added each time. At the end of the process, drain well and cut into 5×5 mm dice.

Quince is a seasonal fruit, although nowadays it can be purchased year round. The tutti frutti cube is used very differently, since after cooking with brown sugar and lemon juice, it is processed at maximum speed and steamed, all in the robot. It is reprocessed to refine the quince paste as much as possible and is stored in a refrigerator in glass containers. It is preserved in glass because in this way the cooling is faster and it gels better. This is possible thanks to the large amount of pectin that the quince contains naturally, an ideal feature that is used to the maximum in this preparation. The following day, the quince is spread on a silicone mat or on a 4 mm tray and cut into cubes. You can add a point of value to the tasting by adding nuts or caramelized pine nuts.

Thus, he book reclaims one of the most traditional forms of gelling to make a sweet with a large number of stalwarts and possibilities in ice cream. In the popular recipe book, the combinations between quince jelly and cheeses are recurrent. Therefore, frozen versions can be made starting from this combination, between the quince jelly and the cheese ice cream family.

A second method of gelling is obtained with the application of agar agar, an ingredient of marine origin with a professional use that has spread considerably in recent years. This natural gelling agent allows to make jelly beans with intense fruit flavor, with a much more delicate, attractive texture and less sugar than in a pumpkin confit. Thus, besides having less sweetness than the traditional candied fruit, it has a shelf life of at least six months in the freezer and three months in the refrigerator. Another advantage that agar agar provides is that it prevents the gelled fruit pieces from sticking together during handling.

In the book Más, by Mario Masiá, we work with a formula calculated based on fruit such as the mango and raspberry, which have a sugar concentration percentage of around 20º Brix. The proportion to obtain fruit dice with a suitable sweetness and consistency is 200 grams of puree and half of sugar. If fruit with less Brix degrees is used, the amount of sugar should be increased a little to reach the parameter marked as a reference, which allows the cubes to withstand temperatures of up to -11ºC. As we know, Brix degrees of fruit are measured with a refractometer. It will be a necessary tool to start the compensation game between fruit puree and sugar from this point of reference because in general terms the amount of agar agar will be invariable, five grams.

It is important to note that if less sugar is used and the same amount of agar agar will logically vary the texture and more gummy dots will be achieved. If, on the other hand, more sugar is added than the stipulated amount and the agar agar ratio is maintained, we would obtain softer doughs, such as gummies, which would break more easily in the production process and in their incorporation into ice cream.

Through the rapid freezing of liquid nitrogen, different techniques are used to introduce frozen fruit stumbles into ice cream. Martín Lippo, expert in this matter, shows us two applications with this gas in liquid state, the fruit nib and nitro dots. Of the two,  the nibs are the simplest and fastest technique, which consists of submerging the fruit in a nitrogen bath. Ultrafast freezing naturally separates certain fruits in their different parts, for example pits and juice sacks. A good indication that the nitrogen is freezing the fruit to the maximum and acting in the best possible way is when it ends up “boiling” violently, that is, it stops smoking and stabilizes. By freezing so quickly, the internal water crystals are minimal and do not break the cell walls of the fruit. This technique can not be applied in all fruits, only in those with well-delimited pits and juice sacs that can be separated in deep-freezing. They are the following: lime, orange, lemon, tangerine, grapefruit, raspberries, and blackberries.

Once the fruit is separated, the nib is formed with an adequate roller pressure because it is important to separate the fruit, not to crush it. However, in the specific case of blackberries it is easier to separate the pits using a pestle.

Nibs are demonstrating great versatility in their applications. The separated pits are also used as top decoration for cakes, replacing the typical presentation with whole fresh raspberries; or, in terms of savory dishes, as an orange granola and fennel salad served at room temperature, for example.

The second liquid nitrogen technique is more laborious, but it has very interesting results. To make the nitro dots, the cold plate and the liquid dispenser are combined to transform fruit puree into drops or frozen pearls, which can be personalized with any flavor, without the limitations of fruit granule. In the latter case, it is possible to macerate the fruit with sugars in order to lower the PAC (Antifreeze Power) and find a texture which is not so hard in the mouth.

The origin of the technique dates back to 2010, when Martín Lippo collaborated with the 100% Chef brand. He discovered that if he combined the cold plate (Teppan Nitro) with a liquid dispenser (Caviar Box), designed to make a caviar with the spherification technique, you could make frozen drops of innumerable flavors, both sweet and savory. Named nitro dots, they were an interesting advance because they achieved a regularity in the size of the ball and a productivity of up to 96 nitro dots in each new round. The technique needs a bit of practice at first, but once acquired it is all advantages. For example, its production can be increased with the use of more than one nitro plate from 96 to 192 units, including 288 and 384 (…) nitro dots each time.

Its inclusion in ice cream is “almost a given, having already the example of the stracciatellas that we make with the fruit nibs. Only in this case the range of possibilities multiplies because we decide what flavor we want,” says Lippo. In ice cream, they can be incorporated into any mix, you just have to adjust the texture that the Caviar Box accepts to work.

It is necessary to control the density of the liquid so that the Caviar Box works correctly. Thus, textures that are too fluid and excessively thick should be avoided.

On the other hand, it is interesting that the texture of the nitro dot is harder than the ice cream that “envelops” it to be able to find them more easily during the tasting.

Discover more information, recipes and practical examples on these and other techniques in the book Más, by Mario Masiá.

Winterspring. A Danish look at dessert

Sébastien Trudelle: ‘My preparation was very complicated. I tried to do things I did not know how to do’ 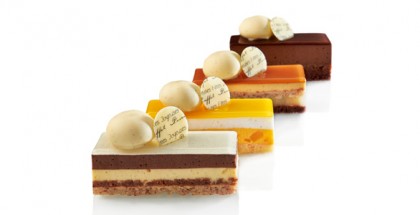 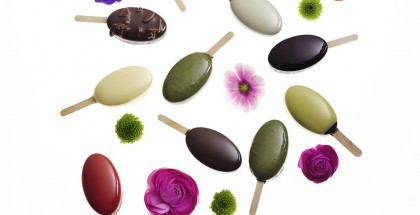