Time for Break! at L’Atelier 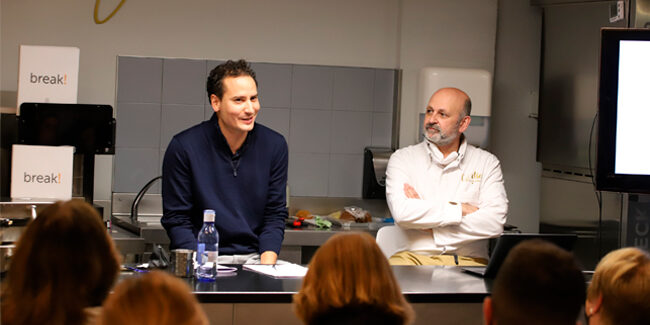 Tea time at 5:00 pm was the moment chosen for the presentation of Eric Ortuño’s first book, Break!, on November 10 at L’Atelier Barcelona. An act that also captured the spirit of the book’s “tea break”, like the kind one takes from the day to relax and have a cup of tea or coffee in the company of a good tea pastry. This was the atmosphere that reigned in this joint event between the author and Grupo Editorial Vilbo-Books for Chefs, held in this important school and pastry shop in Barcelona’s Eixample district.

The presentation started with an introduction to the author and the book by the head of the editorial project, Luis Concepción, then leading to Eric Ortuño. During the presentation the close relationship forged with the pastry chef over the years was valued as well as the aspects that from the beginning caught our attention about him, like his unique, humble, and generous leadership style; the will to always evolve, the imperative need to be different; and most important of all, a surprising multi-functionality and versatility. All of these aspects have always given him an advantage in the creation of new products, applying techniques and knowledge from one discipline to another and vice versa. The truth is that over time, we have been privileged witnesses of this permanent evolution, of a leadership that has generated great teams in workshops at his side, and of a versatility in varied disciplines that have made him a multi-faceted professional.

What is truly exceptional is that he combines two very unusual facets because he is not only a very complete professional, he has also become a true specialist in tea pastries. This is something that has just been confirmed after his second victory in the Dulcypas Award for the Best Tea Pastry in Spain in 2020, which we, Grupo Editorial Vilbo-Books for Chefs, organize. Because of his result in the competition the second time around, we decided to tempt Eric Ortuño with a book that would comprehensively review the tea pastry, the crunchy product par excellence and with a long shelf life that has undergone great evolution in recent years. As Paco Torreblanca recalled in his foreword to the book, a traditional specialty that Eric has transformed into a current, modern product with a visual impact. This is what he has precisely achieved thanks to this duality that characterizes him so much, a well-rounded professional and at the same time a great specialist in a product like this. Hence, he has also applied ideas, techniques, and technologies from other areas of gastronomy to innovate in tea pastries. The introduction of food printers; confectionery glazes and fillings; techniques for making dragees; doughs of other families of products such as cakes; concepts from the world of petit four and savory pastry, among many others, are some outstanding examples.

On his part, Eric Ortuño made it clear that he is one of the main promoters for updating the cookie through a review of the wide variety of concepts and crunchy proposals found in Break! Additionally, he screened a promotional video for the book and continued with the live production of one of the most representative tea pastries in the book, the pecan gaufrette.

After the presentation, there was a tasting of a large selection of tea pastries from the book, and on which several copies of the book were also being exhibited. The act concluded in an emotional way with a toast from Eric Ortuño himself with his family and friends from the world of pastry and book signing. 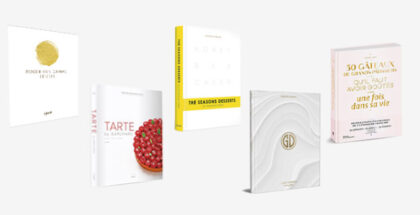