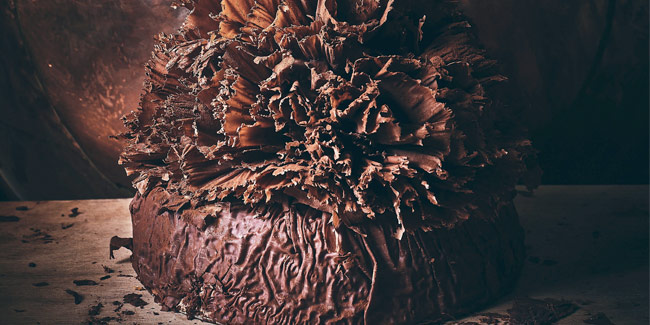 In the book, “50 gâteaux de grands pâtissiers“, published by Editions La Martinière, up to 50 great chefs generously share the secrets and recipe of one of their emblematic cakes, creations that have marked and redesigned the landscape of sweet gastronomy.

To write this book, available in French on our Books For Chefs online store, Hélène Luzin, founder of the Marques et Chefs agency, traveled throughout France to visit their workshops and conduct interviews. 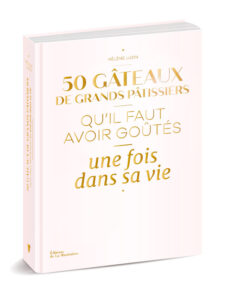 Throughout its pages, the reader can discover the ins and outs of iconic creations such as Le Président by Phillipe Bernachon (Maison Bernachon), “created in 1975 by my two grandfathers, Paul Bocuse and Maurice Bernachon, on the occasion of the delivery of the Legion of Honor to Paul Bocuse by Valéry Giscard d’Estaign”, explains Philippe in the book. For the dinner celebrating this grand occasion, Maison Bernachon and Paul Bocuse wanted to arrive at l’Elysée with an absolutely original creation. This would be Le Président, specially created for the occasion (the first version for twenty people weighed 3 kg).

Philippe Bernachon is, among other things, a kind of living legend in the chocolate industry in France and in the 70s was already a precursor of the Bean to Bar philosophy. Since then he has not stopped making his own chocolate, giving it a unique touch and marketing it from his establishment in Lyon.

But back to Le Président; has the recipe changed since then? “The cake has decreased mainly in alcohol. If my grandfather put any alcohol in it in his time, it was to keep it longer, but the result was a biscuit saturated with alcohol. Currently, alcohol, more than an ingredient in itself, is a condiment that serves to enhance flavors. Besides that, the recipe has not changed, except that the alcohol is no longer Cherry Marnier but rather the one made by the Crozet brothers. And we candied our own cherries, which also come from the Lyonnais region,” he says. 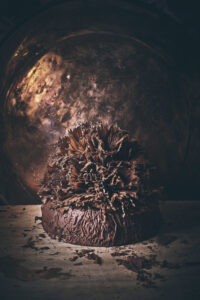 Heat the eggs and sugar in a bain-marie, stirring with a whisk. Beat the mixture to ribbon stage. To achieve this, the use of an electric mixer is recommended to work faster. Add the previously sifted flour to the mixture, then the melted butter. Fill the buttered and floured molds halfway. Bake at 180-200°C for 15-20 minutes. Unmold as soon as you take it out of the oven and place it on a rack. Let cool and wrap the cake in transparent film.

Bring the cream to a boil, stirring regularly. Finely chop the chocolate in a bowl. Pour the cream over the chocolate several times. Add the gianduja. Cover and reserve cold. 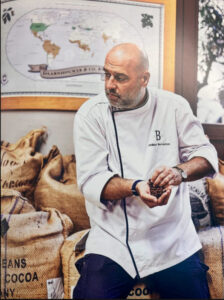 In a saucepan, bring the water and sugar to a boil. Boil for three minutes and then refrigerate. When the sugar syrup is cold, add the alcohol and mix well.

Instructions for the same day: 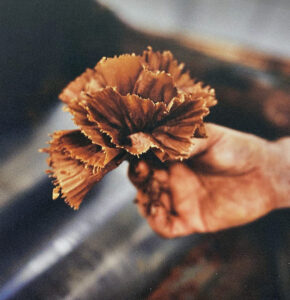 In a bowl, mix the ganache with a whisk, reheating slightly until a firm cream consistency is obtained.

With a serrated knife, cut the Genoise horizontally into three slices of the same thickness.

Cover with the second slice of cake, soak it with punch and decorate it again with ganache, but without adding candied cherries.

Place the third layer of the Genoise, soak with punch and keep cold.

An hour later, remove the entremets from the refrigerator and, with the help of a stainless steel spatula, cover with the previously softened ganache.

At Bernachon, Le Président ends with an original cupola, made up of an assembly of fine chocolate fans placed on the entremets. Sprinkle with a veil of bitter cocoa.

Le Président can also be finished more simply with small chocolate shavings placed on the surface of the entremets. To make the shavings, simply grate the edges of a room temperature chocolate bar with a paring knife. Finish with a veil of cocoa. 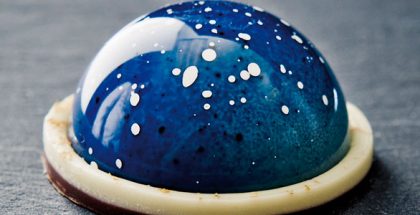 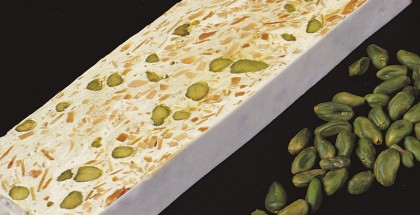 Giorgos Avgeros: ‘The Greek pastry world is on a upward trajectory of progress and evolution. I believe that the future is very bright!’ A new website to better respond to the needs of the professional pastry chef 60 creations by Antonio Bachour A new skin texture by Paco Pérez to boost chef’s creativity