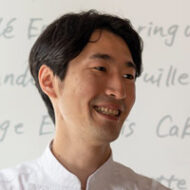 Tomonari Kombu, who was born in a wagashi shop in Fukui, was enthralled by French pastries as a college student in Tokyo. Such was his fascination that he went to work at the famous patisserie ‘Au Bon Vieux Temps’ and at Pierre Hermé’s Salon de Thé. At the age of 30, he decided to travel to France to study Gateau Glasse and regional confectionery at the patisserie “Riedere” in Southern France under MOF. Afterwards in Paris, he was in charge of dessert at the two-starred restaurant, L’atelier du Joel Robuchon. He is currently pastry chef at Un Grain in Aoyama (Tokyo), a pastry shop specializing in mignardises.

“Now that I am in my 40s, I have a greater sense of the good qualities of Japan. I am pursuing the beauty of empty spaces or clearing the clutters, which I think is unique to my country”