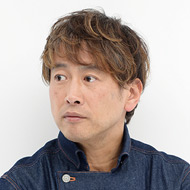 Henri Le Roux, the master of caramel was amazed with his Japanese version of bonbon au chocolat caramel salé called ‘Ikkyu’. Philippe Conticini was enormously amused with the wonderland of sweets on the hill and renowned ‘Koyama Roll’ (a fluffy rolled sponge cake, whipped cream inside). C.C.C. (Club des Crouqueurs de Chocolat) admired the first try of Japanese chocolatier so much that they gave the honored 5 tablets at Salon du Chocolat 2011.
Who is Susumu Koyama? Although he could be a singer, a designer or even a Sakan, a Japanese traditional plasterer, he chose to be a pastry chef after graduating culinary school. Ant it was his calling. Since then, he has been caught by magical charm of pastry-making for 30 years. Now he is 50 years old.
On the hill in Sanda is the Pâtissier eskoyama, a small village accommodated with a pastry shop, a bakery, a specialty shop for jam confiture and macaroon, a café, a chocolate shop and the ‘Future Manufacturing Factory’ which Koyama launches last year just for kids with a sign saying “No trespassing for adults”.

I’m making chocolate with Japanese ingredients, but not only that. I like to add a sense of fun or happy memories from childhood up to date.