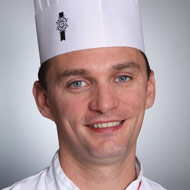 Teacher of pastry cooking and ice cream making at Cordon Bleu in Paris, Nicolas Jordan has worked in many pâtisseries and for 7 years has worked to perfect his technique in ice scultpure in Canada alongside MOF Glacier Christian Faure and Jean-Marc Guillot.

“Curiosity, a logical mind, a desire to share, and of course a love of good food!” These are the values for anyone who wants to work in pastry needs. And this is the philosophy chef Jordan passes on to his students at Le Cordon Bleu in Paris.

Curiosity, a logical mind, a desire to share, and of course a love of good food are the values for anyone who wants to work in pastry needs

Nicolas Jordan. Ice cream at the center of discourse The Sucré Scène at Omnivore convinces everyone 24 pastry chefs in the Scène Sucré of Omnivore 2015 Six candidates will compete in the final of the MOF Glacier in February