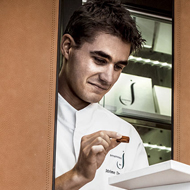 Winner of the Coupe du Monde de la Pâtisserie 2009. He runs ‘Intuitions by J’ in Cannes.

Despite his young age, he has won the world cup twice. Since 2012, he has run ‘Intuitions by J’, located in the exclusive French Riviera. His stalwarts have even used the words ‘nirvana’, ‘high art’ and ‘orgasm’ when tasting his creations.

It’s not me who decides which product will become a speciality, but my customers