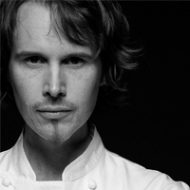 Grant Achatz is one of the most awarded and recognized chefs worldwide. Popular for his innovative, emotional, and modernist style, he has given talks on gastronomy and design at congresses and universities around the world, has been named Best Chef in the United States by the James Beard Foundation and has been honored as one of the 100 most influential people by Times magazine.

Having graduated from the Culinary Institute of America, he knew how a kitchen works very early, as he spent his childhood working in the restaurant that his parents had in Michigan. His brief stint at elBulli with Ferran Adrià prompted Grant to evolve his career and explore his creativity. In 2005 he opened, together with Nick Kokonas, the Alinea restaurant in Chicago with the purpose of redefining fine dining in America, questioning not only the culinary concepts, but also the guest experience, tableware design, and restaurant bookings. Fifteen years later, Alinea has three Michelin stars, has appeared in hundreds of publications and continues to rake in awards. In 2011, Grant followed Alinea with Next restaurant and the uber-modern bar, The Aviary.