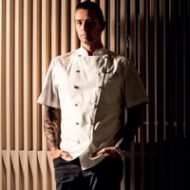 The brand new head of Ever, inaugurated in July 2020 in Chicago, has a long career to his credit that began at the young age of 14. There is no shortage of managing top-level restaurants, such as the previous one, Grace, also in Chicago, as well as different experiences in other great houses, highlighting his time with Charlie Trotter and his time with Grant Achatz when he was named “Best Innovative Pastry Chef”. It is precisely Curtis Duffy’s knowledge and skills both in savory and sweet that has made him work on a culinary proposal that works with both and in reality, the barriers that separate the savory from the sweet.

“When I conceptualize a dish, I try not to think about the limits, it’s about pushing the cuisine forward and if it makes sense and eats well together then why not. Who is to say two elements don’t go together just because one’s a little bit sweet and one is traditionally in the savory world?”