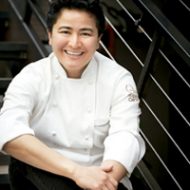 Charisse Dickens is a Hawaiian / Japanese chef who grew up in an organic produce farm on the slopes of South Kona on the Big Island and who entertained her family by imitating the well-known American cook, Julia Child, in the kitchen. After passing through all the sushi restaurants in Florida, she wanted to put her potential to the test and in 2007 she entered the Culinary Institute of America, where she learned that success comes from hard work.

In 2010, she joined the José Andrés’ Think Food Group team, made up of more than 30 restaurants that cover very different cuisines, cultures, prices, and styles of service. She is currently in charge of the R&D department and responsible for the creation and development of ideas, concepts, and products.

“We get a lesson in history each time we create a dish.”