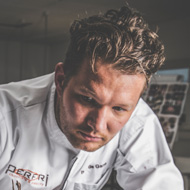 With 15 years of professional experience, the Dutch chef Bart de Gans has shown a tireless creative pulse that has managed to successfully move between bases inspired by classic pastry and an eagerness to innovate and surprise. This is what he tries to show in his training and consulting service named Perfri, moving around the world not only to share his ideas but also to immerse himself in the culture and gastronomy of each country he travels to. One of his favorite destinations has been Japan, an inexhaustible source for learning and inspiration for his creations.

If your style comes from what you really stand for as a person, I think you will more likely be successful