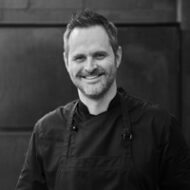 After overcoming a non-Hodgkin’s lymphoma that he contracted at the age of 17, Anthony Hart knew that he wanted to pursue his passion, pastry. After completing his studies at the Swiss Hotel School in his hometown of Johannesburg, South Africa, he got his first job working with former Lebanese soldiers in a large bakery that distributed nationwide.

After a period in Melbourne and later in the United States, in 2013 he decided to establish his own ‘Don’t Lose Your Temper’, a boutique pastry wholesale and retail business in Australia. Currently, the chef has just finished his Bachelor of Arts in Photography at the Royal Melbourne Institute of Technology (RMIT) and remains committed to his pastry vocation.

“I had always been told that pastry was a dying art, but I now believe it’s the driving force of cuisine today”