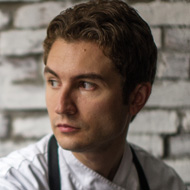 Alex Stupak started in pastry by chance. While in his Culinary Institute of America externship at Boston’s Clio, he had his first taste of pastry in a professional kitchen. There the chef Ken Oringer gave him the book Desserts of El Bulli by Albert Adrià and Stupak was so impressed that he was sure that he wanted to work in the profession of pastry chef someday.

After working in the restaurants Alinea (Chicago) and Wd-50 (New York), in 2011 he took the step of opening Empellón Taqueria. Three more followed, including Empellón Cocina (now closed), Empellon Al Pastor, and most recently Empellón. In these establishments, Mexican food is prepared with inventive culinary techniques and desserts that not only taste good, but also have impressive visual elements.