so good.. magazine > Pastry Blog & News > Pastry Events > All set for this year’s Sigep
No Comments

The fair of excellence in ice cream, Sigep, in Rimini (Italy), from the 18th to the 22nd January, is now ready to open its doors for the 35th year. In addition to the event which receives all the attention, The World Cup of Ice Cream (from the 17th to the 19th January), there will also be loads of other exciting competitions. For the second year running, The Pastry Queen (18th, 19th and 20th January) promises a great deal. It is the world championship of pastry that is only for women, with 12 hopefuls from 5 continents. Celebrated every two years, in its first year it was won by the Italian Sonia Balacchi. And there will also be the opportunity to appreciate the art of chocolate in the international competition The Star of Chocolate (20th and 21st January), and the Italian pastry championships in Junior and Senior categories.

In this organised showcase for new businesses, pastry will occupy a very special place. Not surprisingly, the exhibition space and the activities and technical demonstrations have grown in size and popularity each year with the increased internationalization of the expo. The bakery is a place of particular interest, sponsored by A.B. Tech, where many workshops and demonstrations will take place.

The figures for the number of visitors from last year’s event are providing a sense of optimism: 144,803 visitors in an area of 110,000 m2, split into 16 pavilions. All the data suggests a steady progression in numbers for a fair that keeps on growing. 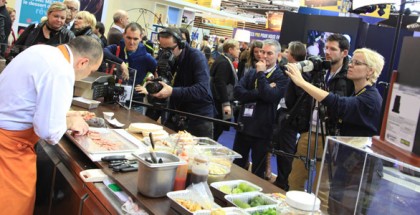