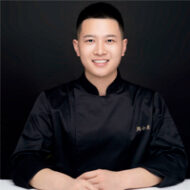 Trained as a Chinese pastry chef and with five years experience in the armed forces of his country, it was in 2012 when Zhou Xiaohu had the opportunity to come into contact with  Western pastry. The experience seduced him so much that since then he has not stopped building bridges between one tradition and another, becoming a leading figure as a teacher at the international pastry school TDessert. His creations are colorful and original, and he also demonstrates that he is a perfectionist, usually stating that “devil is often hidden in the details”. This is why he has become very popular known in Instagram as “Lucky Tiger 211”

“Western pastry is just like music and literature in general. Everyone loves beautiful and touching things, regardless of language or skin differences”

Zhou Xiaohu: ‘There is nothing more fascinating than my job itself’