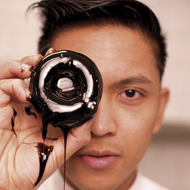 Pastry Chef at the restaurant Acadia in Chicago.

At the early age of 16, he enrolled in the California School of Culinary Arts. After signing up and working in different restaurants in Los Angeles, he traveled to Europe and worked alongside Pierre Hermé in Paris. Back in the USA, he spent two years as a pastry chef at the L20. When he started his current job, as a pastry chef at the restaurant Acadia, Raquel was searching for a way to utilize the sourdough starter he had leftover from a previous menu item. ‘I just thought I’ll make sourdough doughnuts,’ he says, thinking they would make a great addition to the upcoming brunch menu. Proud of his successful effort—on the first try, no less—Raquel tweeted a photo of the finished product. The beautifully chocolate and caramel glazed doughnuts caught the eye of plenty of people. ‘I can’t believe how much press we got,’ says Raquel. ‘It exploded everywhere.

Keeping it simple, no matter what you are making, is something Raquel always keeps in mind. ‘I try to be different, but it still has to make sense,’ says Raquel, who doesn’t understand chefs who incorporate ‘weird’ ingredients just because it sounds cool