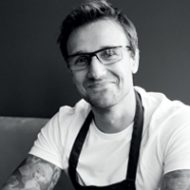 The career of the Polish chef Patryk Szczepański has gone through several establishments in which the type of product offered and the range of responsibility acquired only increases. The tutelage on this path of the also Polish Michal Wiśniewski (Hotel Haffner) and his stop as Pastry chef at the Hilton Hotel in Gdansk would be the peak of his training as a professional. After that, his concern to continue learning, and the influence of international figures such as Ramon Morató, Mathie Dienrick, or Jordi Bordas, led him to collaborate at the Chocolate Academy in Lodz and to form his own consulting company, Pure Sugar. Personally a follower of the vegan diet, in recent years he has made a particular effort to make pastry that does not give up anything in terms of sweetness, but that keeps ingredients of animal origin aside. And that is what he shares with us in his collaboration for the magazine.

Patryk Szczepański: ‘it is a good kick off to question the existing paradigm and to try to create vegan cream or butter’